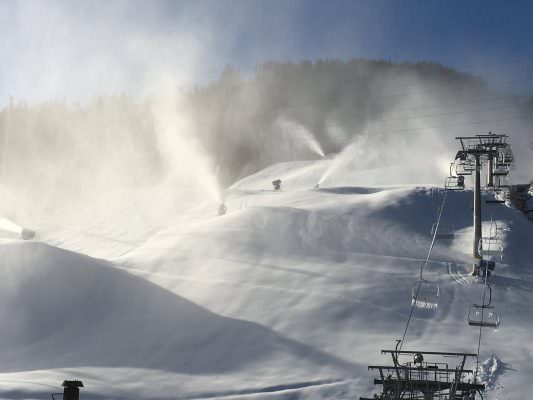 In recent years the Kreischberg has clearly demonstrated its commitment to high-performance snow-making facilities whenever these are required. Consequently, it has continued to upgrade its snow-making systems.
The snow-making “centrepiece” on the Kreischberg is the large reservoir. Located at 1.800 metres above sea level, it holds 250,000 cubic metres of water – making it Styria’s largest snow-making reservoir.
The 115 km of pipelines which have been installed on the pistes supply 147 snow machines. Thanks to this high-performance snow-making system it is now possible to provide excellent snow cover across over 90% of the skiing area  in just a few cold days!

How the snow-making system actually works

Specially generated snow provides a good basis for optimum snow cover in a skiing region. The Kreischberg has one of the most powerful snow-making systems throughout Austria. Such systems essentially consist of three components:

Reservoir
Reservoirs are used to store water and build up supplies which can then be used in winter. The best sites for such reservoirs are right on the mountain – just like here on the Kreischberg.

Pumps / pipelines / hydrants
Hydrants are used to distribute the water stored on the mountain and can easily be hooked up to snow generators, just like a fire engine. Hydrants are sometimes located next to the ski slopes.

Snow generators
After arriving at the snow generator, the water is finely atomised and ejected through an air jet as in the case of a “classic snow gun” or the water droplets fall to the ground as in the case of a snow lance. In both cases the water droplets freeze as they pass through the cold air. Snow made in this way is immediately ready for use and ensures perfect piste conditions.

The snow-making system is computer controlled, which is why can be ideally produced in accordance with the weather conditions. Snow-making, however, is only possible when the temperature falls below freezing point!